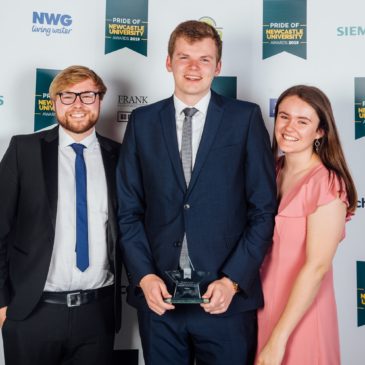 On Thursday night Tom, Carey and Will were representing the team at The Pride or Newcastle University Awards where we scooped the @Siemens Award for Outstanding Contribution to Sustainability and the Environment. #nclprideawards19. Another great win for the team, and a fitting end to their last week in charge.

Friday saw the big one with the “End of Year Brewery Bash”. The rain did its best to spoil the occasion, but thanks to everyone who made it down and braved the weather to help us celebrate the end of the academic year in style. Big thanks to The Real Mediterranean Kitchen for supplying the food and Pete Bennett & Ade Scarlett for providing the tunes!

On Saturday some of the team were on clean-up duty after the events we needed the brewery to be shipshape for Sunday’s brew with @BrinkburnStBrew.

Alan, Harry, and Sandy cooked up a special fruity pale that will be launching at the Brinkburn’s summer festival in a couple of weeks time (21-23rd June). Tickets for the event are available from here. Hope to see some of you there!

… and now to the reason, the blog was late. Yesterday. What. A. Day. We’ve been planning a little something special with Northern Alchemy and The Dog & Rabbit for a couple of months now and we finally got around to brewing this yesterday. Full details we’re keeping under our hat for now, but we will say that it’s gonna be an imperial stout. We were trying out a new double mashing technique by using the wort from the first batch to mash-in the second batch. It worked excellently, and the original gravity is a MASSIVE 1.1093. Which might not mean much to some but roughly translates to North of 10-11% ABV!! The downside was it took forever. We’ll not say how long the brew day took, as it probably broke a few employment laws, but basically, some of us left the brewery in the early hours of this morning.

The blog might become a little less frequent over the next couple of months as some of the team are away for the summer break, and we’re still on the lookout for someone to take over social media responsibilities for next year. We’ll still be brewing and keeping you updated with what we’re up to though so don’t worry 😉

Thanks for all the support this year, and a huge thanks to the outgoing committee who have now officially hung up their Stu Brew overalls… You’ve been a fantastic committee and have left huge safety boots to fill!

That’s all for now,